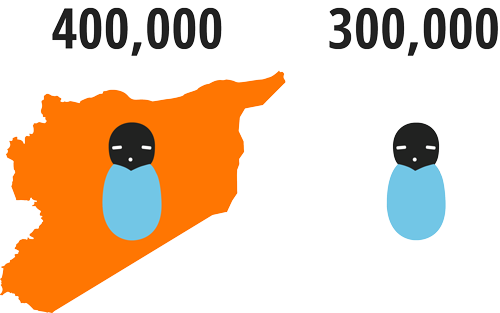 Various factors impede access to birth registration in host countries. Lack of the documentation required to complete the registration is a major problem, with many refugees having lost their documents or had these destroyed. Another challenge is that non-State actors in some parts of Syria have begun issuing documents, but the validity of these is disputed. Marriage registration is particularly important since a marriage certificate is often required for birth registration in the host countries and to establish the identity of the child’s (legal) father. In addition to those who no longer have marriage certificates, problems arise due to the custom within Syria of first marrying in the religious system and delaying, sometimes for a prolonged period, the formal registration of marriage.

Refugees may also face difficulties due to their lack of familiarity with the civil registration process in host countries while authorities in the host countries may not be aware of the Syrian procedures and their bearing on the civil status of Syrian nationals or on refugees’ perception of what is expected of them to register a birth. Prohibitive costs and (in Turkey) language barriers may also create problems of access to civil registration procedures. To overcome these barriers, refugees often resort to coping mechanisms that can put them at further risk such as returning to Syria or falsifying documents.

Persons at heightened risk of statelessness

Six profiles among the refugee population from Syria can be considered at heightened risk of becoming stateless: 1) Children whose birth in the host State is not registered by the statutory deadline; 2) Children born within female-headed households; 3) Children born within child marriages; 4) Undocumented refugees; 5) Refugees not registered with UNHCR; 6) Maktoum refugees. There are, in general, two factors rendering these groups particularly vulnerable to statelessness: gender discrimination in Syria’s nationality law and lack of documentation of identity and nationality. It is important that practitioners are aware of risk profiles and the context which generates this risk, and share expertise with regards to the provision of assistance.

Since Syrian mothers, unlike Syrian fathers, cannot transmit their nationality to their children when born outside Syria, the key factor in determining access to Syrian nationality is prove of descent from a Syrian man. Where there are particular difficulties in registering the births of children or in documenting this connection with a Syrian father are therefore at particular risk of statelessness. All the groups identified as being at risk of statelessness share this general characteristic.

Around a quarter of Syrian refugee households are female-headed – the father is not present. In this context, evidence of the Syrian nationality of the father of the child may not be available and the women may in any case face difficulties registering the birth of the child if authorities demand the presence of or proof of the identity of the father. Children born within child marriages are among those least likely to have their births registered, since these marriages are themselves illegal and so unlikely to have been officially registered. In addition to the reluctance of the parents to have contact with the authorities for this reason, the lack of a marriage certificate can, as noted above, be an impediment to registering the birth of a child. Children whose births are not registered by the statutory deadline are also likely to remain undocumented due to the complexity and cost of late registration procedures.

The remaining three risk profiles are refugees who are ‘undocumented’ in one way or another. Undocumented refugees are at heightened risk because they cannot provide proof of their identity or link to Syria. Of particular concern are the Maktoum, i.e. individuals who were never registered in Syria, often as a result of inter-generational lack of documentation within a family. This circumstance, coupled with their subsequent displacement, puts them and their children at a considerably higher risk of statelessness than the general refugee population. For such undocumented or unregistered refugees, registration with UNHCR can provide vital evidence of their identity and origin in Syria.

Among those displaced from Syria are also a sub-set of stateless refugees: people who were already stateless in Syria and have fled the conflict to neighbouring countries. There is no reliable data as to how many refugees from Syria are stateless, but at the end of 2015 UNHCR estimated the stateless population still in Syria as 160,000. The main profiles of stateless refugees are stateless Kurds (Ajanib – those registered as ‘foreigners’ in Syria and Maktoum – those completely unregistered in Syria) and Palestinian refugees from Syria (PRS). There are also a small number of isolated cases of stateless individuals who failed to acquire Syrian nationality due to gender discriminatory laws or lost nationality at some point because of political activism.

Being a stateless refugee from Syria can generate additional protection challenges. Stateless persons from Syria often do not have proof of identity or they hold different documents from refugees who are Syrian nationals, which may not be recognised in the host country. This can render them unable to access civil registration and other required identity documents. Many stateless refugees have also crossed the borders irregularly which can compromise their legal stay in the country. Some cases have also been reported in which stateless refugees experienced difficulties registering as refugees with the relevant body. Other protection problems include restricted freedom of movement, increased fear and uncertainty and heightened pressure to return to Syria. In the longer term, stateless persons may face problems when accessing durable solutions available to the Syrian refugee population. A more fundamental problem is the difficulty of identifying stateless refugees and the fact that even when identified they may not be registered as stateless by humanitarian organisations. This makes it hard to assess their situation or provide targeted support and contributes to the invisibility of this group.

To find out more about all of these issues, 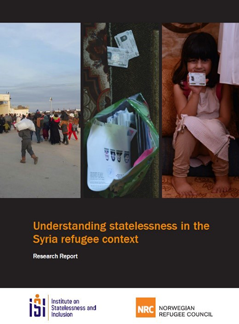