The Syrian Nationality Law was enacted in 1969, through Legislative Decree 276. The full text of the law in English can be found online here. Below is a summary of the main rules relating to acquisition and loss of Syrian nationality which are relevant to understanding the potential nationality problems of Syrian refugees.

How can a person acquire Syrian nationality?

Through parents: The law is predominantly based on paternal jus sanguinis: This means a person will become Syrian, wherever they are born, if they have a Syrian father. Birth to a Syrian mother does not automatically confer nationality, however the law does allow transmission of nationality from the mother if the child is born in Syria and the father is unknown. However, this provision is not always implemented in practice. When born abroad an individual will only be Syrian if their father is Syrian. 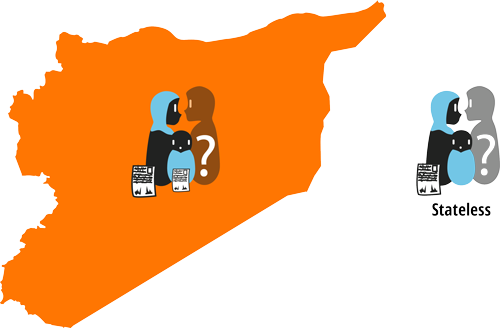 Born stateless in Syria: Syrian nationality law contains a safeguard against statelessness at birth whereby a foundling (an abandoned infant), a child born in Syria to stateless parents, or a child born in Syria who does not acquire another nationality should be considered Syrian (Articles 3(C) and 3(D) of Legislative Decree 276). However, these safeguards against statelessness at birth are not systematically implemented. Moreover, this provision only applies to children born in Syria and so clearly does not apply to the children of refugees from Syria who are born in host countries.

Through Naturalisation: The other way to acquire Syrian nationality is through naturalisation. Non-nationals who have resided in the country for over 5 years and fulfil a number of other requirements, (different requirements exist if the individual is from another Arab country), such as being able to speak and read Arabic fluently, can apply for naturalisation. A non-national woman who marries a Syrian man can naturalise on the basis of that marriage. Citizens of other Arab countries benefit from facilitated naturalisation (i.e. a waiver of some of the criteria for naturalisation). The legislation allows dual nationality, so a person can be a citizen of both Syria and another country.

How can a person lose Syrian nationality?

Syrian nationality law allows a citizen to renounce their Syrian nationality voluntarily, but only following acquisition of a different nationality. The law also sets out seven criteria under which a person may be stripped of their nationality. For example, joining the military service of another State or residing in a State that is at war with Syria. As such, the Syrian State enjoys significant discretionary powers to denationalise a citizen and these powers may be exercised even when this leaves the individual stateless.

What implications does the Syrian nationality law have in the displacement context?

With so many Syrians now displaced, there are many situations in which it cannot be established that the father of a child is Syrian: the marriage may not have been registered; marriage documents may have been lost; fathers may be dead, lost or have moved on to third countries; or their whereabouts or identity may be unknown. A combination of one or more of these factors can mean that there is no legal or physical proof that a child’s father is Syrian. In some neighbouring countries a child cannot be registered without legal proof of the father’s identity. In all countries, when a refugee mother cannot prove that the father of her child is Syrian, discrimination in Syrian nationality laws puts her child at risk of statelessness.